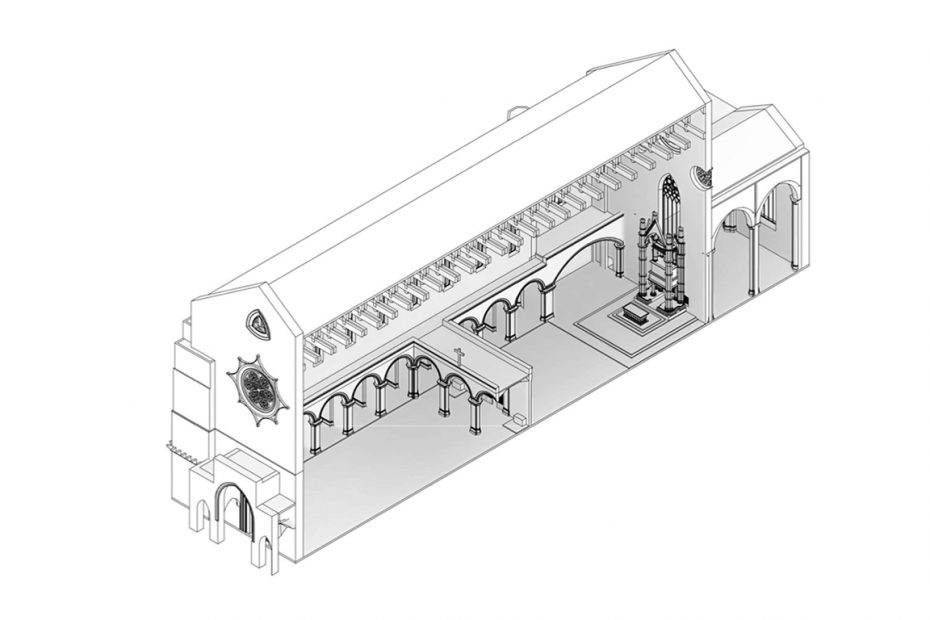 Sta. Chiara is one of the largest churches of Naples, erected between 1310 and c. 1340 by the King and Queen of Naples, Robert the Wise and Sancia of Mallorca. It was reconstructed after the Allied bombardment of August, 1943, which damaged the walls and destroyed thestucco decoration of the 18th century.

In the Middle Ages the nave of Sta. Chiara, as in other religious buildings, was divided into several sections by a choir screen, or tramezzo. These were substantial masonry walls that separated the lay public from the clergy; in the case of this church, the choir screen would have included chapels and altars that were important for the devotion of the lay public.

Prof. Caroline Bruzelius (Duke University) has worked with a group of students and colleagues at Duke University and the Universities of Padua, Naples, and Salerno on this project, trying to reconstruct the choir screen and the church with the help of 3D technologies. Creating a 3D model enabled the research team to think through the various options and arrive at a plausible hypothesis of the dimensions of the choir screen at Sta. Chiara, engaging as well with issues of visibility from the nave of the church through to the main altar and the tomb of King Robert the Wise (d. 1343).

The choir screen formed the central subject of study for Lucas Giles’ MA in Digital Art History Master’s thesis. Its reconstruction and visualization were the main focuses of University of Padua students Andrea Basso and Elisa Castagna’s visit to Duke.