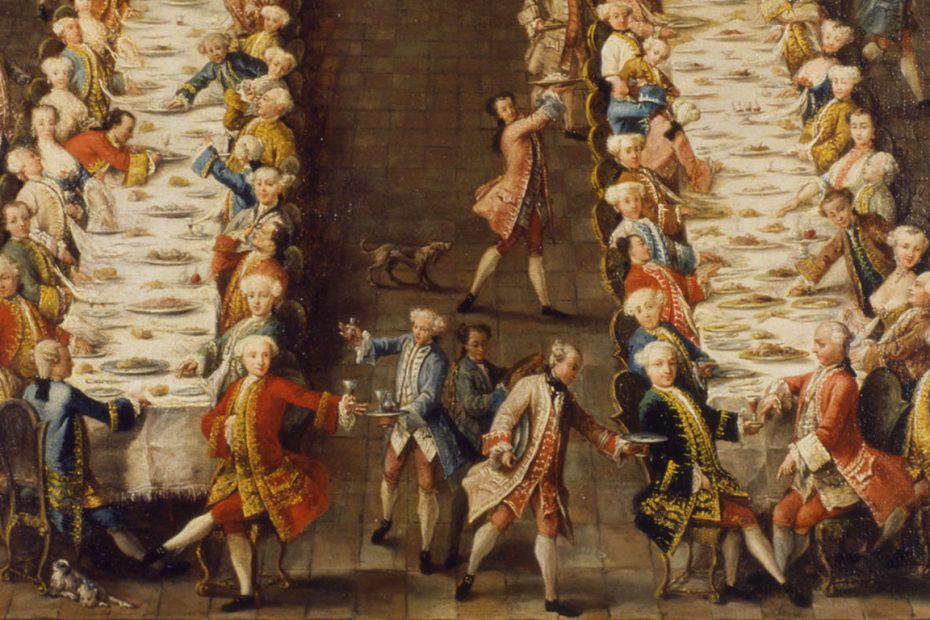 Water and Food in Venice

Stories of the Lagoon and the City

Venice was created as a series of transitions from mainland to lagoon, from lagoon to the Mediterranean, and eventually to a network of ports and islands that became part of an empire of commerce. The original settlement, built on low tidal islands, was created in a precarious balance between the land and water, the community permeated by canals in a continuous, complex and skillfully leveraged relationship. The contrast between “natural” and “artificial” has always been a distinctive feature of the city, an emblem of Venetians’ inventiveness and tenacity as well as of nature’s destructive and transformative force.

The lagoon therefore conditions the city: they exist in a contrapuntal dialogue, the voice of each essential to the whole. This profound connectedness between Venice and the lagoon is expressed in historic maps, which show the city in the center, defended by a cordon of beaches that separate and protect it from the open sea: a lagoon full of islands of fields, churches and clock towers. The co-existence of fishing, hunting, and agriculture (the cultivation of all kinds of fruits and vegetables, vineyards and herbs) in the lagoon habitat both permitted and promoted Venice’s development. Religious communities were vital nodes in a system of food production and trade: starting in the earliest centuries after the founding of Venice, a series of island monasteries supported a stable galaxy of farms, saltworks, mills, and fish producers.

Historic images of Venice show another unique feature of Venice: a city without enclosing walls. The lagoon, with its strategically located forts, religious establishments, hospitals and quarantine stations, was the real “wall” of the city. Venice redesigned the natural landscape, and sometimes with majestic architecture, to protect itself from human enemies and disease.

Our exhibition, Water and Food in Venice. Stories of the Lagoon and the City, opened September 26, 2015 at the Ducal Palace, is the result of a long-term research initiative developed by an international team of young historians of art, architecture and cities. The group includes experts in mapping, modeling and multimedia from Iuav (Venice), University of Padua, and Duke University via the Visualizing Venice/Visualizing Cities collaborative. Water and Food in Venice is the first public-facing presentation of the multifaceted collaboration that began in 2010 as “Visualizing Venice” the joint inspiration of Caroline Bruzelius (Duke University) and Donatella Calabi (University IUAV of Venice).

A key feature of the exhibition is to model how the support systems for the Republic of Venice addressed questions that are critical on a global scale to us today: supplying densely-inhabited communities with fresh food and water. The exhibition offers the opportunity to consider historical models for large-scale environmental management in a setting unique in its challenges and diversity. The exhibition forms part of larger initiatives connected with the 2015 International Exposition in Milan, “Feeding the Planet.”

A Portrait of Venice
Senses of Venice
Venice Virtual World