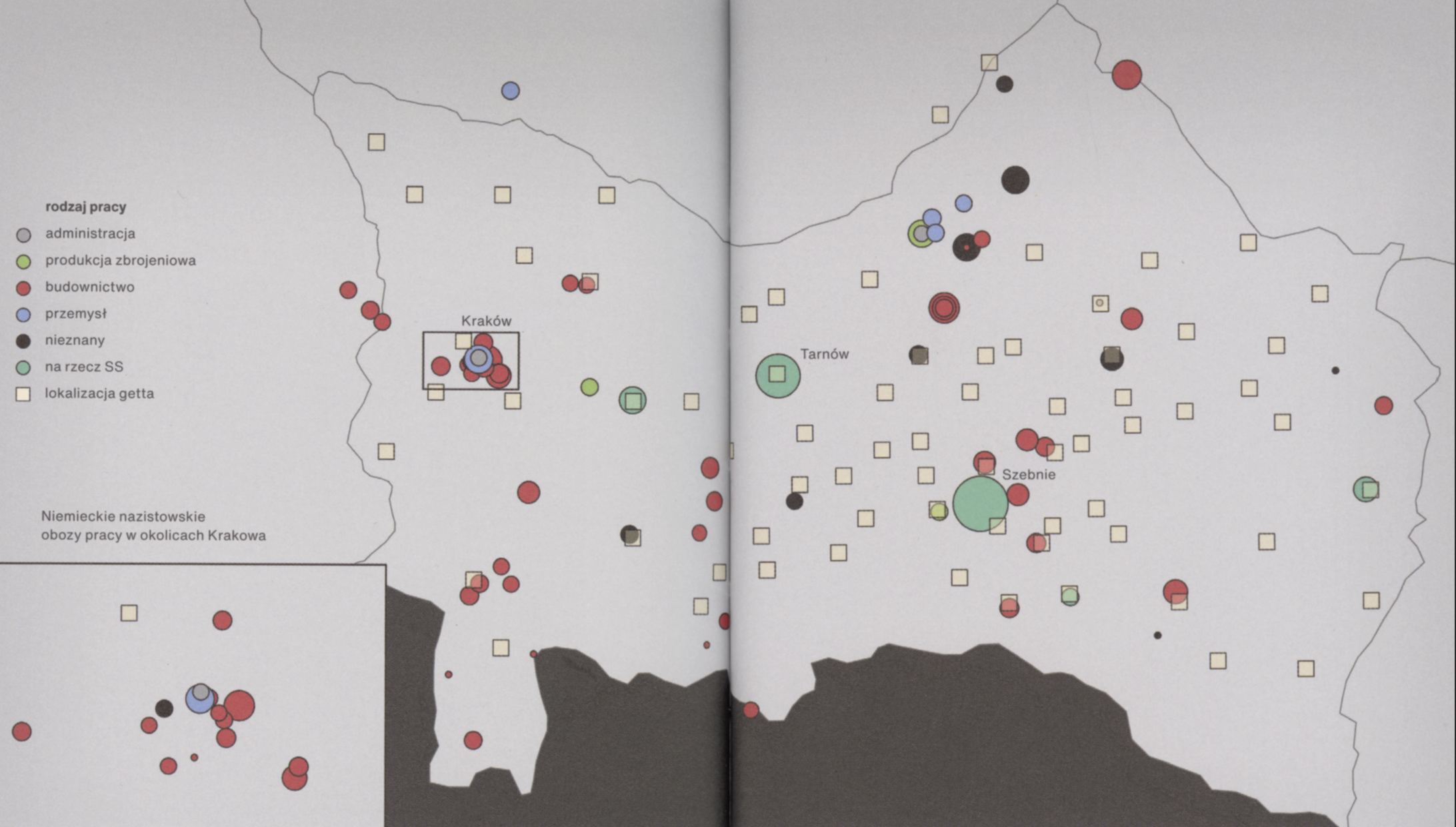 DAHVCR Lab work was recently featured in the catalog for the exhibition “Unwanted Capital: Architecture and Urban Planning in Krakow during the German Occupation 1939-45.” The exhibition (curated by the International Cultural Center in Krakow) was held in Summer 2022 and featured photographs and drawings of multiple construction sites in Nazi-occupied Krakow.

The map shown above, by Classical Studies PhD student and Mapping Occupied Krakow team member Antonio LoPiano, highlights the intersection of forced labor and construction in Nazi-occupied Poland. The map, which is being featured in the exhibit Unwanted Capital, visualizes the forced labor system that the Nazi regime put into place in Distrikt Krakow. The symbology represents different industries with circles representing camps. Each circle is sized proportionate to the number of inmates employed there. Ghettos are represented as as squares.  The visual distribution of the various labor categories exposes both the perpetrators’ goals and the victims’ experiences in their forced relocation within a network of brutal labor extraction.

About the process of making the map, Antonio LoPiano said

“The underlying data of this map is drawn from the United States Holocaust Memorial Museum’s Encyclopedia of Camps and Ghettos, so the whole process began with converting the narrative form of the encyclopedia entries for each site into a queriable database. It took a collaborative effort from our whole team to build this database, which we also assembled for other Nazi Occupied Distrikts as well. Once the data for Distrikt Krakow was finally ready, I brought it into a Geographic Information System platform [ArcGIS Pro] and was finally able to see how the various industry and labor networks were spatially intertwined with the ghetto system for the first time.”

“Krakow became the focal target of the German plans to eradicate Polishness. This determined the subsequent fate of the city, which the Nazi authorities cast not only in the role of the capital of the ‘Nebenland,’ but also that of the model German city in the East. This objective was pursued through a special programme meant to deprive Krakow of its Polishness, consisting not only in the use of bloody terror, but also in the destruction of Polish elites and cultural and scientific institutions” – “Unwanted Capital”, prof. Jacek Purchla.